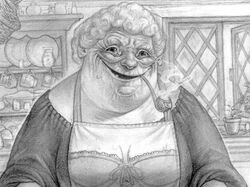 Gytha Ogg (usually called Nanny Ogg) is a character from Terry Pratchett's Discworld series. She is a witch and member of the Lancre coven.

The character of Nanny Ogg is based on the Mother stereotype of the Triple Goddess myth. She's had 5 husbands and been married to three of them and has fifteen children who survived their early childhood (one was born some ten years after the death of her last husband). She has as well innumerable grandchildren and great-grandchildren, but that's incidental; what makes her the Mother is her mentality. People go to Granny Weatherwax for help when they have no choice, but they go to Nanny for advice all the time. Granny is respected, but Nanny is actually liked.

Nanny Ogg has a talent for getting along with people and fitting in. As described in Maskerade, people, after knowing her for fifteen minutes, feel like they have known her all of their lives. Granny Weatherwax knows about this ability, and recognizes its use, and wonders sometimes if it would have been worth acquiring it.

She is wiser than Esme Weatherwax in some ways, and certainly wise enough not to show it. Nanny Ogg is seen as "one of the people" in a way that Esme isn't. While Granny thinks there's no point in competing if you aren't going to win, Nanny reckons the sympathy you get for being a good runner-up is much better. Granny comes across as judgemental, whereas Nanny has a mind so broad she could tie it under her chin. She appears to be kinder than Granny, but is equally prepared to make tough decisions if necessary.

Contrary to Granny Weatherwax, and indeed the stereotype of witches in general, Nanny Ogg doesn't live in an isolated, crumbly rural cottage but in an expansive and well-looked after town house in the capital of Lancre, called Tir Nani Ogg ("Nanny Ogg's place," and a pun on the Gaelic name for the Land of the Ever-Young). She fills it with knick-knacks such as pink skulls and rude garden gnomes that serve no useful purpose except to highlight her eccentricities. She shares this home with Greebo, a tomcat of evil aroma and astonishing viciousness, whom she can see only as a fuzzy harmless kitten.

In The Art of Discworld, Pratchett says, "I've always suspected that Nanny is, deep down, the most powerful of the witches and part of her charm lies in the way she prevents people from finding this out." In his short story "The Sea and Little Fishes" Nanny Ogg also identifies herself, and the Ogg family as a whole, as having immense natural magical talent, but is less willing to work it as hard as Weatherwaxes do.

Nanny has written several books, including The Joye of Snacks, Mother Ogg's Tales For Tiny Folk and Nanny Ogg's Cookbook . The first two were withdrawn following the publisher realising what they were really about; the third survived with heavy editing.

It should also be noted that Nanny really likes to eat and drink despite only having one remaining tooth (The sight of Nanny Ogg eating a pickled onion supposedly brings tears to the eyes). When she's drunk she has a tendency to sing very "special" songs, the most popular being "The Hedgehog Can Never Be Buggered At All" or simply "The Hedgehog Song" (never really unveiled by the author beyond a few lines, but many readers have written their own versions [1]). "The Hedgehog Song" was probably borrowed from a Harry "Haywire Mac" McClintock song recorded in 1950 by Cook Records and American Folkways (available on iTunes). A close runner up for the most popular Nanny Ogg song is "A Wizard's Staff has a Knob on the End", a version of which has been written by Heather Wood, with music by Dave Greenslade[2].

Nanny Ogg's bath night, as described in the novel Lords and Ladies, is an event feared by the entire population of Tiffany by talking about Roland, Tiffany's nervous pen-pal, and other romantic prospects. Nanny Ogg is very funny and has a tremendous laugh that, as Terry Pratchett put it, "could even have embarrassed the little, wooden man".

As the "matriarch" of her vast extended family, Nanny Ogg indicates the relative standing of her various descendants by positioning their portraits around her house, the "highest" being the most visible and the "lowest" of all lining Greebo's basket. However, the only people who appear truly to suffer are her daughters-in-law, of whom she has dozens and rules over with a tyrannical authority. Nanny lives her life exactly as she wishes, and her daughters-in-law are those who make that possible. If the floors aren't scrubbed, or her breakfast not served on time, there are consequences. Nanny never remembers their names, either.

Nanny Ogg is far too wise and busy to carry a handbag; she keeps all she needs in her knickers, lifting her skirts to reveal a knickerleg, and extracting whatever is needed at the time. She does, however, carry a string shopping bag against emergencies, such as being presented with a loaf or a pie or a dozen buns (probably by a baker who knows that such a gift to a witch ensures reliably good baking).

In the Discworld amongst the duties of a witch are midwifery and laying out the dead. If possible, people call Nanny for the former and Granny for the latter. In effect Nanny and Granny make a perfect team with Granny doing what needs to be done and Nanny bandaging the wounded. Indeed, in Thief of Time, Nanny Ogg is sought through various timeframes as she is/will become the best midwife in the world.

She has an ambiguous relationship with Count Casanunda, whom she met in Genua. Nanny Ogg is also the muse and center of Leonard of Quirm's masterpiece, the Mona Ogg: her teeth follow you around the room, they say. She briefly took on Tiffany Aching as an apprentice after the death of her previous mentor, Miss Treason.

It was observed in more than one occasion, by Granny Weatherwax, that Nanny Ogg has impressive social skills. She has demonstrated the ability to socialize with all kinds of people within a very little time (Maskerade, Witches Abroad, Lords and Ladies) which sometimes leaves Granny wondering 'if Gytha has some sort of special magic'.

In the Wyrd Sisters animated adaptation, Nanny Ogg was voiced by June Whitfield.

Retrieved from "https://discworld.fandom.com/wiki/Gytha_Ogg?oldid=11492"
Community content is available under CC-BY-SA unless otherwise noted.