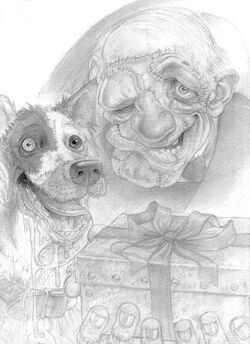 The Igors are a recurring set of characters in Terry Pratchett's Discworld series of novels. They are members of a clan of servants from the region of Überwald, all of which are named Igor. The Igors are based partially upon Mary Shelley's Frankenstein's Monster, and partially upon the hunchbacked assistants in Universal and Hammer's film versions. While they are born in the normal fashion, the clan's strong tradition of surgery usually means that by the time they would have grown to maturity in the natural way many of their body-parts have already been swapped around repeatedly, mostly within the clan.

All Igors have stitches, but these appear to be more like clan markings than actual repairs. The male members of the Igor clan traditionally lisp (though sometimes some forget), are considered very good catches for any young lady (it is probably best not to wonder why), and their daughters tend to be very attractive ("Eyes on the same level, that sort of thing?" as Samuel Vimes once commented). In Making Money, it is shown by Herbert's Igor that their lisping is actually just for show, because people "expect it." The female members (Igorinas) tend to not show their stitches, but share the talent of the males. They also generally do not lisp as much.

While they are extremely diligent in using their surgical skills among themselves they are also careful to share them among the people around their homes, possibly in a bid to make sure that when the torch-bearing mob comes along to kill the latest freak of science the resident Igor will be spared. The tradition is that people helped by an Igor should later allow it to have a "rummage around" for useful organs after they die. If the Igor is turned away from the house, no Igor will help that village again. The Igor clan motto is, "What goeth around, cometh around... or thtopth."

When an Igor suffers irreparable damage (which is hard to achieve in people who install back-up hearts and a lightning rod down their backs), they are usually "broken down for thpareth"; their functioning body-parts are distributed amongst those who need them and their brains are conserved until such time as another Igor finds a semi-willing patient with irreparable head-trauma, or manages to construct a suitable body from available parts.

Beyond surgery, Igors have an advanced knowledge of what they call "bio-artificing" (a kind of genetic engineering which, on the Discworld, involves "very small stitches") and often create "pets" for themselves, such as dogs made from various dog breeds and a rabbit with human ears growing out of it. A hamster created by such methods apparently broke out of its cage and chewed off a man's leg before flying away. An Igor's expertise in human surgery also extends to the veterinary world; there is known to be one horse in Ankh-Morpork, owned by Hobson's livery stables (which employs an Igor), with a longitudinal seam extending the entire circumference of the animal, sewn together from the remains of a particularly nasty collision. It is advisable, when asking an Igor about his job, not to allow your imagination to follow his answer all the way.

They have a strange ability to be at your side (or just behind you) when you call them, and at a door before you knock. Their other ability, returning to a room unnoticed while having previously left through a door, is possibly a spoof of the common bloopers and mistakes in old horror movies. They also have a knack for making any door they open creak.

An Igor servant is considered a must by all members of the Überwald upper classes and, naturally, by any serious mad scientist. In recent years, they have increasingly been seen outside of Überwald, where their skills far outstrip those of any non-Igor surgeon on the Disc.

Igors have a particular code of honour, which makes them very loyal and hard-working. The code is explicit on certain matters: Never quethtion the marthter ("No, thur, that'th an artery"); never path judgement ("What do you want a hundred virginth for?"); never grumble ("Where am I going to find a brain at thith time of night?"). If an Igor spent any time in making value judgements, he would never get anything done. They will continue their servitude even if they disapprove of their master's work, but their faith is merely strong, not boundless; in the words of one of the founding Igors: "We belong dead? Excuthe me? Where doeth it thay 'we'?"

Igors are well-known for knowing exactly which Igor a person is talking about, despite the facts that they are all named Igor and that the speaker hasn't yet told them which Igor they are referring to. Igor-recognition by sight takes some practice but is quite possible to do: the key is the stitch pattern.

One Igor went with Samuel Vimes to Ankh-Morpork. He now works for the Ankh-Morpork City Watch and is a prominent bio-artificing specialist. This Igor appears in The Fifth Elephant, The Truth, Night Watch and Thud!. He shows a disregard and scorn for traditions of Igors, such as lisping, which he sometimes forgets or neglects to do. Interestingly, young Igor's father admitted that young Igor was too modern for Überwald, but respected his skills (saying he's never known anyone as good at "really tiny thtitching").

When the Magpyr family went to Lancre they naturally brought along their Igor, who is more traditionally minded than his employers and has a dog named Scraps (or "Thcrapth") that he built himself. See Carpe Jugulum.

Another Igor shipped himself to Ankh-Morpork to assist Jeremy Clockson in building a glass clock, as told in Thief of Time. This Igor is a member of an organisation called We R Igors (slogan: "A Spare Hand Where Needed", c-mail: yethmarthter@uberwald).

A (female) Borogravian member of the clan served in the Cheesemongers with Private Perks, in the book Monstrous Regiment. The discription of Igorina in her true appearance also hints that female Igors are indeed good looking (more than just "eyes on the same level").

Reacher Gilt, Chairman of the Grand Trunk Company in Going Postal employed an Igor, as does the horse dealer Willie Hobson. Once he set a bear trap behind him and called for Igor, who successfully set off the bear trap without being caught in it. Igor considered it something of a joke, and told him that a previous employer of an inquiring mind would often stand with his back to a spiked pit and call for him.

There are supposedly several Igors at the Free Hospital.

Confusingly, the barman at Biers (a pub in Ankh-Morpork catering to the undead) is named Igor, but is not an Igor, and reacts poorly when this suggestion is made. He appears in Feet of Clay, Hogfather and Thud!.

An Igor works at the Royal Bank of Morpork and assists Hubert Turvy in the creation and maintenance of the Glooper, a device that models the economics of the entire city as they happen.