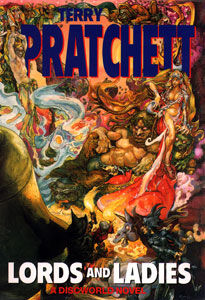 Lords and Ladies is the fourteenth Discworld book by Terry Pratchett. It was originally published in 1992.

The book is a follow up to Witches Abroad. The witches Granny Weatherwax, Nanny Ogg and Magrat Garlick return home to the little mountain kingdom of Lancre, where they discover that amateur practitioners of witchcraft have weakened the fabric of fantasy. Elves manage to break through, and must be defeated.

The plot turns on Magrat's wedding to King Verence II, and her misgivings about it. The plot includes several elements of A Midsummer Night's Dream by William Shakespeare, and quotes lines from various folk songs about elves. The sub-plot includes the Unseen University wizards, mainly Archchancellor Mustrum Ridcully, Ponder Stibbons, the Bursar and the Librarian.

According to Pratchett himself, this is one of the few Discworld novels that cannot stand on its own; one needs to have read the previous two books in the Witches sub-series, Wyrd Sisters and Witches Abroad, to have a proper understanding of the characters and their relation to each other.

The line, "[...] young Magrat, she of the [...] tendency to be soppy about raindrops and roses and whiskers on kittens" is an obvious reference to the song 'My Favourite Things' from The Sound of Music which Maria, played by Julie Andrews, sings for the Von Trapp children when they are frightened by the thunderstorm. The opening verse goes:

Raindrops on roses and whiskers on kittens,
Bright copper kettles and warm woollen mittens,
Brown paper packages, tied up with strings,
These are a few of my favourite thinnnnnnnnnnnngs.

the line, "And besides, the bitch is... ...older." resonates with a quote from Christopher Marlowe's play The Jew of Malta (act IV, scene i):

Barnadine: "Thou hast committed --"
Barabas: "Fornication? But that was in another country; and besides, the wench is dead."

The line, "the young corn lay down. In a circle." is a reference to the 'phenomenon' of Crop Circles - supposedly mystical rings that have appeared in farmer fields around the world. New Age mystic types believe that they are caused by alien space craft or some supernatural intelligence. More pragmatic types believe that they are caused by unusual winds (mini-cyclones). Cynics say they are caused by hoaxers trampling the fields in increasingly elaborate patterns to put one over on the new age mystics - the latter likely the cause in all but a few cases.

Pratchett says that "Nanny Ogg never did any housework herself, but she was the cause of housework in other people." which has its roots in a line by William Shakespeare in King Henry IV, part 2, act 1, scene 2, where Falstaff says: "I am not only witty in myself, but the cause that wit is in other men."

The line, "Some people are born to kingship. Some achieve kingship, or at least Arch-Generalissimo-Father-of-His-Countryship. But Verence had kingship thrust upon him."

Once again the original quote is by William Shakespeare, from Twelfth Night (act 2, scene 5), where Malvolio reads in a letter (which he thinks was written to him by his mistress):

"In my stars I am above thee; but be not afraid of greatness: some are born great, some achieve greatness, and some have greatness thrust upon 'em."

"Now he was inspecting a complicated piece of equipment. It had a pair of shafts for a horse, and the rest of it looked like a cartful of windmills. [...] 'It's a patent crop rotator,' said Verence." The patent crop rotator is one of those imaginary tools to fool the naive since crop rotation means growing different things in a field in successive years not using a machine to move the crops around while they are being grown. John Lloyd of Black Adder fame used the patent crop rotator in the cult TV comedy series The Young Ones' episode Bambi.

The line, "I asked Boggi's in Ankh-Morpork to send up their best dress-maker [...]". Boggi Milano is an Italian men's fashion company but Pratchett's name also reminds the reader of Gucci's.

The line, "[...] it was always cheaper to build a new 33-MegaLith circle than upgrade an old slow one [...]" is an obvious reference to computers - CPUs and MHz.

Death says, "I LIKE TO THINK I AM A PICKER-UP OF UNCONSIDERED TRIFLES." a reference to how little people value their lives until it is too late but also a Shakespearean reference. In The Winter's Tale Autolycus ("a Rogue"), saying in act 4, scene 2:

"My father named me Autolycus; who being, as I am, littered under Mercury, was likewise a snapper-up of unconsidered trifles."

The line, "My lord Lankin?" is a reference to a villainous child murderer in a traditional English folk ballad popularized by Steeleye Span on their album The Commoner's Crown. Lankin in 'Lords and Ladies' is a sadistic member of the Faery Queen's Court and entourage. Steeleye Span was Pratchett's favorite band.

The reference, "One of them was known as Herne the Hunted. He was the god of the chase and the hunt. More or less." In Wyrd Sisters he is referred to as the terrified and apprehensive deity of all small furry creature". The Roundworld equivalent is Herne the Hunter / Cernunnos is God of green and growing things; huntsman, spirit of earth, birth and masculinity. Often pictured seated cross-legged with antlers on his brow, he is [...] tutelary deity of many modern witch covens."

The names of the would-be junior witches resonate with the names used in Good Omens: Agnes Nitt is similar to Agnes Nutter, and Amanita DeVice is similar to Anathema Device. Amanita is also a deadly poisonous mushrooms. There is a Perdita in Shakespeare's The Winter's Tale; the name meaning 'damned' or 'lost'. The names of these junior witch wanna-bes are based on the names of the Lancashire Witches who lived around Pendle Hill and were the subject of England's most famous 17th century witch hunt and trials. The story is described in some fictional detail in a little-known 19th century book called, The Lancashire Witches, written by William Harrison Ainsworth. Ainsworth also wrote a book called Windsor Castle in which Herne the Hunter appears as a major character.

The references to the names of the "new directions"; 'East of the Sun, West of the Moon' is a well-known phrase which originates as the title of an Scandinavian fairy tale, which can be found in a book by Kay Nielsen, titled East of the Sun and West of the Moon -- Old Tales from the North, which Pratchett acknowledges is the source for his use of the phrase. The line was also used by Tolkien in a poem, by Theodore Roosevelt as the title for a book on hunting, and by pop-group A-ha as an album title.

'Behind the North Wind' comes from the title of a book by George McDonald: At the Back of the North Wind, the term itself being a translation of Hyperborea.

'At the Back Of Beyond' is another old expression which may have originated from Sir Walter Scott's The Antiquary: "Whirled them to the back o' beyont".

'There and Back Again' is the sub-title of Tolkien's The Hobbit, a common Pratchett reference.

'Beyond the Fields We Know' comes from Lord Dunsany's novel The King of Elfland's Daughter, where "the fields we know" refers to our world, as opposed to Elfland, which lies 'beyond'. The phrase was also used as the title of a collection of Dunsany's stories.

The line, "You know, ooh-jar boards and cards [...] and paddlin' with the occult." is an obvious reference to Ouija boards; the popular means of communicating with the dead. The board has letters and symbols on it, and the spirits supposedly move a glass over it and spell out messages. The name 'Ouija' derives from 'oui' and 'ja', two words meaning 'yes', one of the symbols on the board.

Granny Weatherwax leaves her " bedde and rag rugge" to "my freind Gytha Ogg" The origins of the 'rag rugge' are more fully explained in Equal Rites.

The line, "'Kings are a bit magical, mind. They can cure dandruff and that.' is a likely reference to the old beliefs that kings were divine and therefore magical or at least had certain supernatural powers. One of these is the belief that the King's touch can cure scrofula (also known as the King's Evil), which is a tubercular infection of the lymphatic glands. Tolkien uses a similar legend in The Lord of the Rings and Shakespeare refers to it in Macbeth, act 4, scene 3.

Pratchett says, "Within were the eight members of the Lancre Morris Men [...] getting to grips with a new art form." In Roundworld Morris teams put on so-called 'Mummers Plays' which are traditional plays with a common theme of death and resurrection. They are performed on certain key days of the year, such as Midwinter's Day (Magrat's wedding is on Midsummer's Eve!), Easter, or All Souls Day (The day after Halloween), at which time the Soul Cake play is performed and a Soul Cake which is similar to a Madeira Sponge Cake.

In the discussion about Morris dancers and plays the comment "Hah, I can just see a real playsmith putting donkeys in a play!" is an obvious reference to A Midsummer Night's Dream, by William Shakespeare which has a person wearing a donkey's head in it.

Retrieved from "https://discworld.fandom.com/wiki/Lords_and_Ladies?oldid=12347"
Community content is available under CC-BY-SA unless otherwise noted.