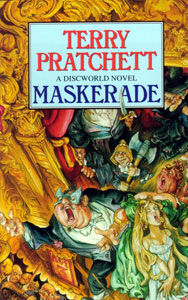 Maskerade is the eighteenth novel in the Discworld series by Terry Pratchett. The story is an obvious parody of The Phantom of the Opera, which was originally a novel by French writer Gaston Leroux and made famous by Andrew Lloyd Webber's 1986 musical version and earlier by the Lon Chaney film adaptation in 1925. The title is a reference to the most well known song from the musical entitled "Masquerade".

The story pokes fun at opera in general and the Phantom of the Opera in particular. Throughout the story there are references to the ongoing debates in operatic circles between on one hand the traditional large women who can sing but don't look anything like the character they are playing - the 50 year old "fat lady" playing the part of the consumptive young heroine - and on the other hand the young thin woman who looks the part but doesn't have the lungs to sing the role. Agnes Nitt, a girl from Lancre fits the role of the large buxom traditional looking opera star while Christine who is patterned after "Christine Daae" from the Phantom fits the more modern opera soprano style.

The story begins on the heath with the two Wittches Granny Weatherwax and Nanny Ogg (as in Macbeth) discussing when they will meet again and realizing that a coven needs three witches not two. Since they are one short after the departure of Magrat Garlick who left to become Queen of Lancre, they journey to Ankh-Morpork to bring Agnes Nitt back to join their coven as well as to obtain the money owed to Nanny Ogg by the publisher of her book, The Joye of Snacks. Agnes, who has a beautiful singing voice has left Lancre to seek a career in music, singing in the taverns before joining the Ankh-Morpork Opera company, which is being haunted by a ghost, to sing in the chorus. Here she meets Christine, a thin talentless girl who the Ghost of the Opera House seeks to make the new diva. Agnes, who has the talent to be the new diva is seen as too fat. Since Christine can't sing, Agnes Nitt is used as her backup voice, giving Christine the spotlight. With the money from her book rightfully coerced out of the publisher, Granny Weatherwax pretends to be a rich patron to catch the Opera Ghost. Near the end of the novel, Andre, a member of the Cable Street Particulars, along with the Witches determine that the finances of the Opera House are deliberately kept in a total mess to disguise the money-laundering going on, and the murders and 'accidents' were caused to distract the manager from investigating the matter properly.

It is revealed that there were two people pretending to be the ghost, the original Ghost was the janitor's son who wished to watch the Opera, while the second Ghost did it to steal the money.

A significant character in the book is Walter Plinge, the Opera House's clumsy and not-too-bright odd-job man. He is, quite possibly, really the suave "Opera Ghost", but is described in terms reminiscent of Frank Spencer, the lead character of the BBC sitcom Some Mothers Do 'Ave 'Em. The joke is that this character was played by Michael Crawford, who went on to play the Phantom in the Andrew Lloyd-Webber musical. the name Walter Plinge is itself foreshadowing because 'Walter Plinge' is a generic pseudonym often used in the theater world by an actor who has two different roles in the same play.

The Artistic Director of the Opera is Mr. Salzella (a play on the words Salt and seller) and a reference to Antonio Salieri (whose name means Seller of Salt) but also a play on Cellar (the basement of the opera house where his money is stashed). The real Salieri was a well known Italian classical composer, conductor and teacher from Venice who lived in Vienna and was a key figure in the development of late 18th century opera. He was one of the most important teachers of his generation and his influence was felt in every aspect of Vienna's musical life. Schubert, Beethoven, and Liszt were among the most famous of his pupils and he was a lifelong friend of Mozart.

Granny Weatherwax and Nanny Ogg visit the Isle of Gods which is located in a meander of the Ankh River. This is a play on the name of the area of London known as the Isle of Dogs (the location of Canary Wharf).

The Cable Street Particulars are inspired by the Baker Street Irregulars from the stories of Sherlock Holmes, and also a reference to the Battle of Cable Street, a riot started between Oswald Mosley's British Union of Fascists and anti-fascist protesters in 1936. They are also known as The Unmentionables (British slang for underwear), possibly a parody of The Invincibles, an Irish extremist nationalist group, or of The Untouchables, a prohibition-era law-enforcement group, who served as government intelligence.

The line "'We're going to have to get Mr Cripslock to engrave page 11 again,' he said mournfully. 'He's spelt "famine" with seven letters --'" is a reference to the celebrated 'famine' error in the Corgi paperback edition of Good Omens.

The line "Let us examine the role of Laura in Il Truccatore -- "The Master Of Disguise", also sometimes vulgarly known as "The Man with a Thousand Faces"...'" is a reference to the nickname given to Lon Chaney, the actor who played the Phantom of the Opera in the original silent Hollywood production. In that production the Phantom is beaten to death and thrown in the river and this is alluded to in an earlier reference when Nanny Ogg and Granny Weatherwax are sitting in the Opera House.

At the end of the opera when the opening bars of the duet began, Agnes says -- 'Stop right there!'" which is a reference to the line from Paradise by the Dashboard Light by Meatloaf. Afterwards Nanny Ogg says, "Now the opera's over" because it isn't over until the fat lady (Agnes) sings.

Some of the operas being performed or talked about are:

The Enchanted Piccolo - The Magic Flute by Wolfgang Amadeus Mozart,

as well as some obvious musicals:

Guys and Trolls - Guys and Dolls

Granny Weatherwax says " -There's one with lots of sailors dancin' around singin' about how there's no women -". This is likely a reference to Gilbert and Sullivan. Both HMS Pinnafore and The Pirates of Penzance use this kind of theme, as does Rogers and Hammerstein's South Pacific in the song "There is nothing, like a dame".