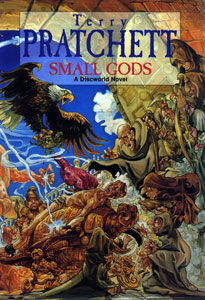 Small Gods is the thirteenth of Terry Pratchett's popular Discworld novels, published in 1992. It tells the origin of the god Om, and his relations with his prophet, the reformer Brutha. In the process, it satirises religious institutions, people, and practices, and the role of religion in political life. Omnianism bears a resemblance in some aspects to other monotheistic religions, particularly Islam and Christianity.

The great god Om tries to manifest himself once more in the world, as the time of his eighth prophet is nigh. He is surprised, however, when he finds himself in the body of a tortoise, completely stripped of his divine powers.

In the gardens of Omnia's capital he addresses the novice Brutha, the only one able to hear his voice. Om has a hard time convincing the slightly dumb lad of his godliness. Brutha is gifted with an eidetic memory (total recall) and is therefore chosen by Vorbis, the head of the Quisition, to come along on a diplomatic mission to Ephebe.

With the help of Ephebe's Great Library Om learns that Brutha is the only one left believing in him. All others either just fear the Quisition's wrath or go along with the church out of habit. While in Ephebe, Brutha's memory aids an Omnian raid through the Labyrinth guarding the Tyrant's palace.

Fleeing the ensuing struggle by boat, Brutha, Om and a severely injured Vorbis end up lost in the high desert. Trekking home to Omnia, they encounter the small gods who are faint ghost-like beings yearning to be believed in to become powerful. Realizing his 'mortality' and how important his believers are to him Om begins to care about them for the first time.

On the desert's edge a recovered Vorbis attempts to finish off Om's tortoise form, abducts Brutha, and proceeds to become ordained as the Eighth Prophet. Brutha ends up to be publicly burned for heresy while strapped on a heatable bronze turtle. In a deus ex aquila moment Om comes to the rescue, dropping from an eagle's claws onto Vorbis' head, killing him in exactly the same way as the philosopher Aeschylus. As a great crowd witnesses this 'miracle' they come to believe truly in Om and he instantly becomes powerful again. In the book's conclusion Brutha gets made Eighth Prophet, ending the Quisition and reforming the church to be more open-minded and humanist. The last moments of the book see Brutha's death a hundred years to the day after Om's return to power (part of a deal they brokered) and his journey across the ethereal desert towards judgement, accompanied by the spirit of Vorbis, who Brutha found still in the desert and took pity on.

In 2006 the book was adapted as a serial for BBC Radio 4. [1] It starred Patrick Barlow as Om, Carl Prekopp as Brutha, and Alex Jennings as Vorbis. Anton Lesser was the narrator.

Retrieved from "https://discworld.fandom.com/wiki/Small_Gods?oldid=12087"
Community content is available under CC-BY-SA unless otherwise noted.