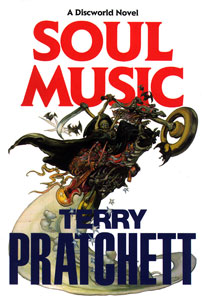 Soul Music is the sixteenth Discworld novel by Terry Pratchett, first published in 1994. Like many of Pratchett's novels it introduces an element of modern society into the magical and vaguely late medieval, early modern world of the Discworld, in this case Rock and Roll music and stardom, with nearly disastrous consequences. It also introduces Susan Sto Helit, daughter of Mort and Ysabell and granddaughter of Death.

The story follows "The Band with Rocks In" through their short-lived but glamorous musical career. The band consists of the following members:

The band is "discovered" by C.M.O.T. Dibbler, who becomes the Disc's first music manager. He tries to cash in by any means possible whilst keeping the band ignorant. He also hires the troll Asphalt as a roadie to accompany the band on its tour.

Meanwhile, Death is in one of his philosophical moods, and takes a holiday in search of a way to forget his more troubling memories, such as the recent demise of his adopted daughter Ysabell and her husband Mort.

In the meantime, his granddaughter Susan discovers the truth about her heritage when she is forced to stand in for her missing grandfather. Complications ensue when she falls in love with Buddy, and tries to save him from his "live fast, die young" destiny as the Discworld's first rock star.

Buddy wants to do a free concert, and after Dibbler figures out how much money he can make by selling T-shirts, sausages-in-a-bun etc. to the audience, he agrees. A large number of bands, all of whom have formed in response to the original "Band with Rocks In", participate in the largest concert of all time.

Afterwards the band flees from their crazed fans. They are pursued by the angry Musicians Guild, C.M.O.T. Dibbler, Susan and Death.

There are many allusions to popular songs, bands and movies associated with rock 'n roll culture between the 1950s and 1990s.

Appearance in other mediaEdit

An animated adaptation was produced by Cosgrove Hall Films for Channel 4 in 1996. It takes the association of the "Band with Rocks In" with the Beatles even further than the book does, evolving their style from 1950s rock and early 1960s beat music (and mixing-bowl haircuts) in Ankh-Morpork, to acid rock in Scrote, to spiritual hippie rock in Quirm. In Sto Lat, they sound like the Jimi Hendrix Experience or Bad Company, but are dressed in clothes similar to the Beatles on the cover of the Sgt. Pepper's Lonely Hearts Club Band album.

Also in Quirm, Buddy says that the band is 'more popular than cheeses,' referring to John Lennon's famous quote proclaiming the Beatles to be more popular than Jesus. In Pseudopolis, their outfits and style resemble the Blues Brothers. The Dean, in addition to his jacket and hair, also plays guitar, specifically the guitar line from All Apologies by Nirvana. The soundtrack was also released on CD but is now out of production.

Retrieved from "https://discworld.fandom.com/wiki/Soul_Music?oldid=12099"
Community content is available under CC-BY-SA unless otherwise noted.