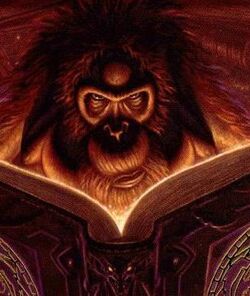 The Librarian of Unseen University is a character in Terry Pratchett's Discworld series of fantasy novels.

The Librarian first appeared in the first novel of the series, The Colour of Magic, and was transformed into an orang-utan in "The Light Fantastic" as the Octavo fired a beam of magic upwards (a sort of systemwide, in this case universe-wide, update intended to save the Eighth Creation Spell (and thus Rincewind) from falling off the disc). Discovering that being an orang-utan has certain advantages for a librarian (climbing the book shelves and using his hands and feet for sorting books being one such advantage), he refused to be transformed back into a human, and has remained an orang-utan ever since. Most of the grimoires are highly dangerous to people, sometimes consuming them, but the Librarian is no person, and no longer requires a ladder to reach those tricky high-up shelves. He retained his position as librarian despite his condition because "he's the only one who knows where all the books are" and the fact that he could screw a man's head off with his feet. The other wizards have gradually become used to the situation, to the extent that "if someone ever reported that there was an orang-utan in the Library, the wizards would probably go and ask the Librarian if he'd seen it." (Night Watch).

The Librarian is known for his violent reaction whenever he hears anyone refer to him as a "monkey" (orang-utans are apes). He speaks an elaborate language whose vocabulary consists of the single word Ook (and its antonym "eek" - where "ook" means yes, "eek" tends to mean no). Nonetheless, most people seem to be able to understand him. Both his language and his reaction were used separately and together as jokes in the first Discworld game.

The Librarian's actual name has never been given in any of the books; he is always simply "the Librarian". If the Librarian's true name were known, he could be changed back into a human, and he has therefore carefully excised his name from the records of the University (since he has special access). The Discworld Companion hints that he may once have been Dr. Horace Worblehat, which goes a long way to explaining why he's happier as an orang-utan than as a human. The Art of Discworld confirms that the Librarian was indeed Dr. Horace Worblehat, and that his fears of turning back into human are baseless at most - although with such a name, one could only surmise that he has a past to which he doesn't want to go back. Rincewind is apparently the only wizard who still remembers the Librarian's name, but agreed not to tell anyone. He and Rincewind share quite a close relationship as they have a lot of history and shared adventures, the librarian liking to hold hands which has been likened to holding a small leather glove.

The Librarian served a brief stint in the City Watch during the reign of terror caused by the dragon of Ankh-Morpork, where he helped rescue Sam Vimes from the Patrician's cell. He retained an honorary position with the Watch, and is considered to be one of the first members of the 'Specials' - the Ankh-Morpork City Militia (Thud!). He also used the Librarianic ability of travelling through L-Space (the extradimensional space that connects all libraries and other large accumulations of books) to save books from the great library of Ephebe in Small Gods. In Soul Music, he joined the Band with Rocks In since his large hands and wide reach make him an excellent keyboard player, though he left before they became famous (which could be a reference to the Beatles). He remains the chief organist for the University and briefly for the Opera House, and does not consider an organ complete without a vox diabolica-stop, a thunder pedal and a 256-ft Earthquake pipe.

The Librarian is a member of a small elite group of senior librarians, who have the knowledge and ability to travel through L-space. The very strict rules that members of these group are pledged to enforce are:

(Of course, the Librarian has been known to break both the first and third rules on occasion, but he is adamant about the second).

He has become a part of Discworld language, in that to go "Librarian-poo" means to go insane (a not-so-subtle reference to the expression Going apeshit).

In the Discworld picture book "Where's My Cow?" it is shown to have won the Ankh-Morpork Librarians award.

In the 2008 TV adaptation of The Colour of Magic and The Light Fantastic, by Sky One, he appears in both human and orangutan form. His human form is played by Nicolas Tennant, who had previously played Corporal Nobbs in Terry Pratchett's Hogfather. This adaptation also establishes his name as Horace Worblehat.