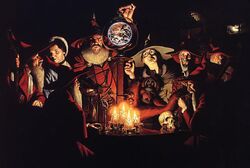 The book alternates between a typically absurd Discworld story and serious scientific exposition.

The purpose of the book is both to entertain and educate. In having fictional sections in which observers from a very different world with a very different set of rules look with confused eyes upon the Earth ("Roundworld"), the authors are able to expand upon things we take for granted, such as planets being round and stars being far away, in a manner which is free of a line of thinking which states "But that's obvious".

The cover of the book, designed by Paul Kidby, is a parody of the 1768 painting "An Experiment on a Bird in the Air Pump" by Joseph Wright of Derby, which is hanging in the National Gallery.

The Discworld part of the book begins when a new experimental power source for the Unseen University is commissioned in the university's squash court. The new "reactor" is capable of splitting the thaum (the basic particle of magic), in homage to another famous experiment in a squash court. However the new reactor produces vastly more magical energy than planned and threatens to explode, destroying the University, the Discworld, and the entire universe. The university's thinking engine, Hex, decides to divert all the magic into creating a space containing nothing - no matter, no energy, no reality, and, importantly, no magic. The Dean sticks his fingers in the space and "twiddles" them, inadvertently creating the universe. The wizards soon discover that they can move things around in the universe, using Hex. They call it the Roundworld (the Earth), because in it, matter seems to accrete into balls in space (instead of discs on the backs of turtles).

The wizards create a series of balls of matter in space, and give one of them a Moon (accidentally). This stabilizes the ball enough that, over a score of millennia (the wizards can skip over vast periods of Roundworld time, allowing them to view the history of the universe in less than a month), blobs of life emerge, ready to begin evolving into more complex forms. The book also features a fictional crab civilisation and the dinosaurs (both of which are wiped out by comets/asteroids colliding with the earth), before jumping ahead to when an advanced civilisation (presumably humans) has evacuated the earth due to an impending natural disaster.

The science centers on the origins of the universe, earth and the beginnings of life, the fiction on the creation of a world (the Earth) in a jar. One of the themes is that most scientific explanations are in reality a good deal more complicated than most of us realize. It is explained that this is because their teachers use Lies-To-Children or, in Ponder Stibbons' case, Lies-To-Wizards.

Retrieved from "https://discworld.fandom.com/wiki/The_Science_of_Discworld?oldid=10014"
Community content is available under CC-BY-SA unless otherwise noted.