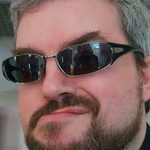 "I'm not an alcoholic. Alcoholics admit that they have a problem and go to meetings. I'm just a drunk."
—Cavalier One[src]

Cavalier One was born in 1979. He is still alive, and not much has happened to him since that time. Except a few broken bones. And grey hair. He is not dead yet, and has no plans to die any time soon, although he does admit that he may have no choice in the matter. He is also a pessimistic optimist, hoping for the best, yet planning for the worst.

In his spare time, Cavalier One enjoys the pub, mainly because they serve alcohol and have Australian barmaids. He also works there as a DJ in addition to his regular day job as an office slave, tied to a computer that has the various wikis he edits constantly minimized in the system tray because his boss believes that if he can't see it on the screen, then it doesn't exist. This goes the same for IRC.

Cavalier One is also an Administrator and contributor over at Wookieepedia, the Harry Potter Wiki and The Firefly and Serenity Database.

Retrieved from "https://discworld.fandom.com/wiki/User:Cavalier_One?oldid=7470"
Community content is available under CC-BY-SA unless otherwise noted.